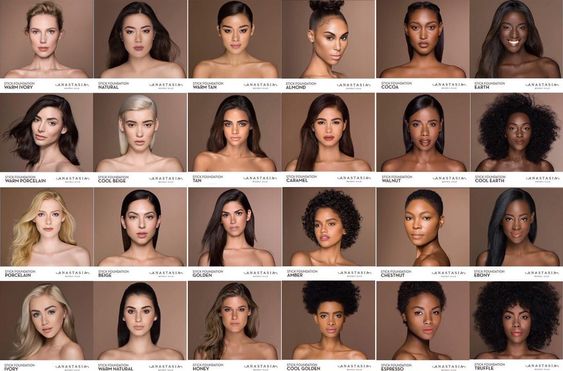 The news is mentioning skin color quite a lot lately, especially in the last decade. “Black Lives Matter”. “White Supremacists”. The “Great Replacement”. A lot of our focus is about human skin color.

As I mention in my novel “The Providential President” (currently only available in French), the concept of “human races” is an invention that has no practical ground. How do you call the offspring of one white and one black parents? There is no such thing as “black race” or “white race”. In fact, there are no boundaries. There are only shades, a continuum.

Besides, skin color is not correlated with other physical traits. Some native Africans are black, but others have a very light skin. Some Native Americans are very fair, while others are quite dark. Most Indonesian people are not lighter than the darkest Africans, and so are some Peruvians as well as Australian Aborigines. Maoris, who are not far off the Australian coast but in a temperate area, have similar skin colors to Southern Europeans. This makes little sense if we think about human migration paths.

So, where did we get our skin color from?

Nina Jablonski and her husband  are very clear about this: skin color depends on sun exposure. Period. Nothing else. Yes, it has nothing to do with facial features, other bodily features or social behavior. However, the correlation with sun exposure – actually ultra violet exposure – is statistically extremely significant.

Well, you’ll tell me: “Yeah, big news, Africans are black and Norwegians are white. As if we didn’t know”. Okay, this is probably not revolutionary. However, it is impressive that such a strong correlation exists. It is exactly as if skin color must absolutely be essential for human survival in a given latitude. And this, regardless of any other human trait.

Here is a map of people’s skin colors all over the world: 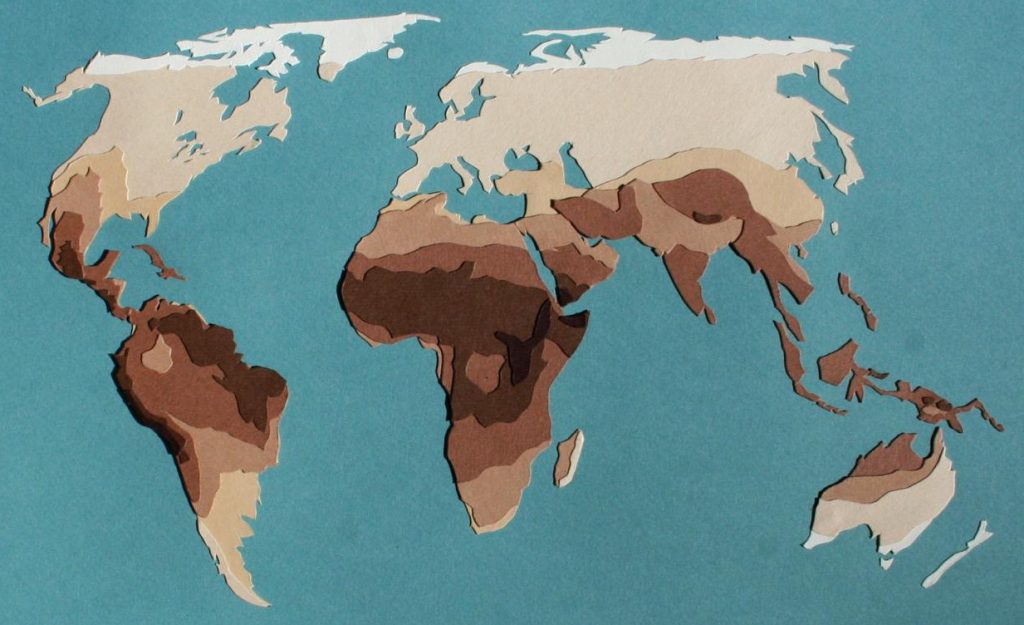 And here is the UV exposure for the same world: 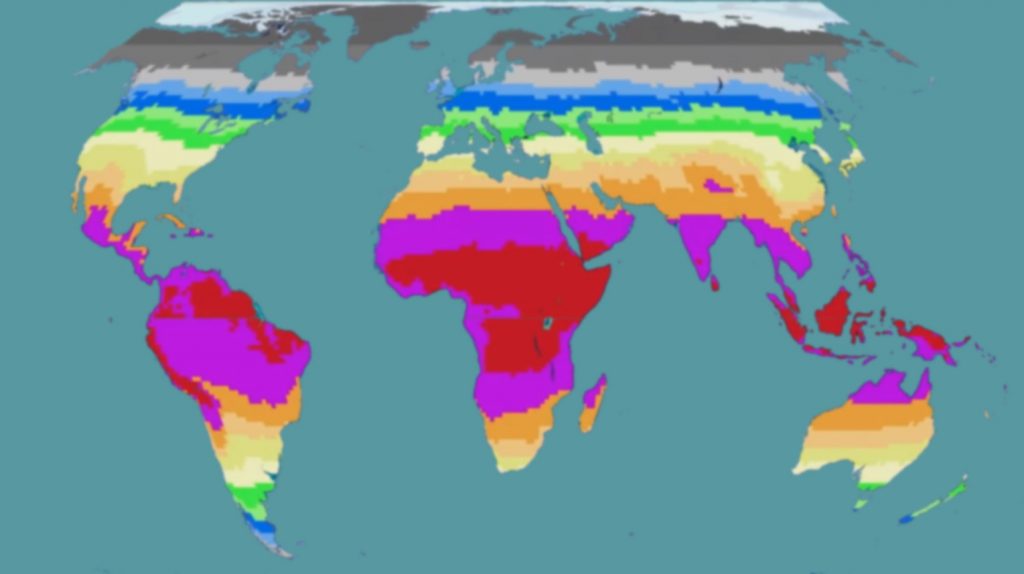 Indeed, all people with dark skin are located near the equator. A little further away, around the tropics and subtropics, we find people with tan skin that can adapt in time to sun exposure, similar to chameleons. Beyond those boundaries, people are mostly fair.

Note that there are two geographical “anomalies”, due to mountain chains: the Andes and the Himalayas. Both have very high UV exposure due to the altitude, and accordingly dark skinned people.

Two main factors contribute to how vital our skin color is at a given UV exposure level.

Folates are molecules (vitamin B) that have a key role in cellular division and human growth. They are found everywhere in the body, including on the skin. So they are quite essential for survival. A deficiency in folates can cause anemia, cancer, cardio-vascular diseases, and congenial deformities in newborns.

However, folates are extremely sensitive to UV light, and literally break down under UV exposure. Accordingly, some research show that folate levels plummet during the summer in the blood stream of humans. Because of this, people who live in areas with high exposure to UV light need to develop dark skin to shield their body against damage to their folates. As a side note, UV light destroys DNA, which is why it is used as a disinfection agent. Too much UV light is very detrimental, and causes skin cancer.

By the way, if you are exposed to the sun a lot in the summer, the best to avoid folate deficiency is to consume a lot of legumes and green vegetables, which are rich in folates. Incidentally, males have naturally lower levels of folates than females.

This explains why people who live under strong UV exposure must have dark skin. Those without the dark skin have less healthy offspring – if any offspring at all. Natural selection over the generation does the rest.

Side note: vitamin D is actually not a vitamin, but rather a hormone. What’s the difference? Hormones are molecules that can be synthesized by our body through chemical reactions. On the other hand, vitamins cannot be directly created by the body: we need to eat/drink them from various sources in our environment. In the case of vitamin D, cells in our skin produce it when exposed to UV light. So, given the definition above, “vitamin D” should actually be called a hormone.

While UV light can be toxic in large quantities, paradoxically it is also essential for our body to function. As I mentioned above, it allows our body to synthesize vitamin D, a vital component.

One of the major role of vitamin D consists in transporting calcium to build bones. Besides, it plays an important role in the immune system, and many of our body’s function. In fact, vitamin D deficiency has been consistently associated with higher fatal outcomes for respiratory diseases in many clinical studies. Just saying! A lack of vitamin D can cause osteoporosis, diabetes, high blood pressure, and cancer, among other things. Some even suggest that it plays a big role in cognitive performance.

So, what happened to humans who migrated to regions where UV exposure is very limited? Well, those who kept their dark skin pigmentation blocked UV light, thus stopped vitamin D production by the body. Given the importance of this vitamin, those individuals certainly didn’t do well compared to those who lost their pigmentation.

To sum up, blocking UV light is great when there is too much of it. However, it is totally counterproductive to block it when there is too little of it. And when your bones break because you lack vitamin D, it becomes difficult to bear a healthy child!

Besides, all cultures living at high latitudes have included an essential element in their diet: fish oil, especially the cod liver one, which is basically the richest food in vitamin D on the earth!

If you are not getting much sun exposure, there is a high probability that you are vitamin D deficient. Consequently, you should probably eat vitamin D-rich foods: fish (swordfish, salmon, tuna, sardine, mackerel…), beef liver, pork chops, chicken breast and eggs, mushrooms, milk or yogurt, oranges, etc. Still, remember that a balanced diet is the best. For instance, eating only tuna fish could expose you to high levels of heavy metals, and you certainly don’t want that.

Consequently, humans all over the world have consistently developed different genes to adopt their skin color depending on UV levels at their home.

But the most striking part comes from sub-tropical areas. Humans who live in those places are faced with a dilemma: the sun can be scorching in summer, but is weak during the winter. This causes problems for very dark or very light skins. On one side of the spectrum, black people don’t get white if exposed to very little sun. As a result, they become vitamin D deficient. On the other end, white people don’t tan under a heavy sun, they burn like steaks – their folates break, and they get skin cancer.

Thus, those humans who live in-between need to develop a special skill: adaptation. Their skin can be tanned easily depending on sun exposure. Indeed, people from the Maghreb or the Middle East have quite a fair skin when not exposed to the sun, but tan very strongly when they are exposed to it. Further, they can get as dark as “black people” when they get a tan.

Conversely, white people up north tend to have a different outcome:

Such is the power of evolving a skin color that matches the environment.

In Japan, Geisha use white paint on their skin. Indeed, skin color takes a social dimension. A white skin denotes a educated and well-off person, who stays indoors most of the time. Conversely, a darker color is the sign of a field laborer, a manual worker, a sub-human. The same prejudice goes for India, where lighter skins gives a higher social status.

Unfortunately, this way of thinking is still too common. We get our skin color by our ancestors, one single generation cannot change it, since this is driven by long-term evolution. However, we still observe a fascination for white skin, which is no more than a black skin that has lost its pigmentation to adapt to a different environment.

Besides, some studies that link genes and “intelligence” fuel more confusion on the matter and enforce the biases on skin color.

Studies show the correlation between some genes and IQ test scores. Although it is interesting to know those results, we shouldn’t draw conclusions too fast from them. Even less create “superior races” on those criteria. Especially as the confusion “skin color=genetic population” is often entertained.

First, an IQ test is a special test that measures a number of capacities. Should our definition of “intelligence” be limited to such aptitudes measured by the tests? Specifically, IQ tests are mostly based on logic, reasoning, calculation. Shouldn’t we also consider as “important” some other human characteristics such as empathy, generosity, people’s “warmth”, to describe a population? Narcissistic people and manipulators are even more dangerous when they have high IQs.

Besides all those are only averages. As any average, it doesn’t mean anything for a single individual. One person who belongs to a certain group with a “lower intelligence” on average may actually be much smarter than another person from a “very intelligent” group.

We should remain extremely cautious when basing a whole ideology on those studies, to confirm… Nazi opinions.

Skin color highly correlates to one and only one environmental factor: sun and UV exposure. It evolves independently of other factors. It is ironical that some people base their judgements of others on skin color alone. Think twice next time you see someone with a skin tone you judge as “negative”. Indeed, their behavior or their intelligence has nothing to do with their skin color. It simply matches how much sun their ancestors have been exposed to.