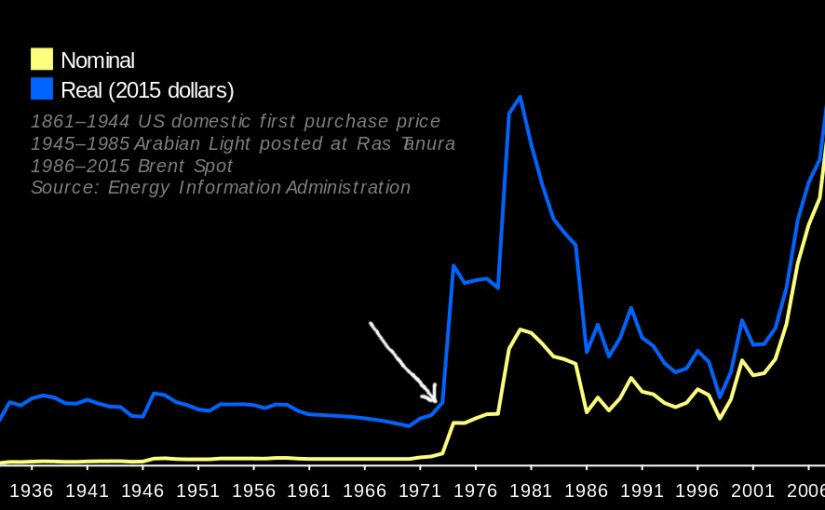 In my book, “Money: What You Don’t Know”, I write that Nixon ditching the Gold Standard was the trigger for the “oil crisis” of the 1970s. But when you read this, you obviously think: “That can’t be true. We all know that the bad OPEC guys caused the Oil Crisis and that the Yom Kippur War was the culprit.”

I certainly won’t deny that some political reasons may have played some role in the crisis. However, I claim that they are not the main factor. Want proof? Here it comes.

Rather than believing what we are told, we should always look at the numbers from every perspective.

Here is what they present us: the Saudis with their OPEC friends started an embargo on oil in 1973. The reason given for the embargo was to protest against countries that were supporting Israel in the Yom Kippur War. Or in the worst case, we’re told it was the OPEC guys who got really greedy. As a result, the prices of oil skyrocketed for good: 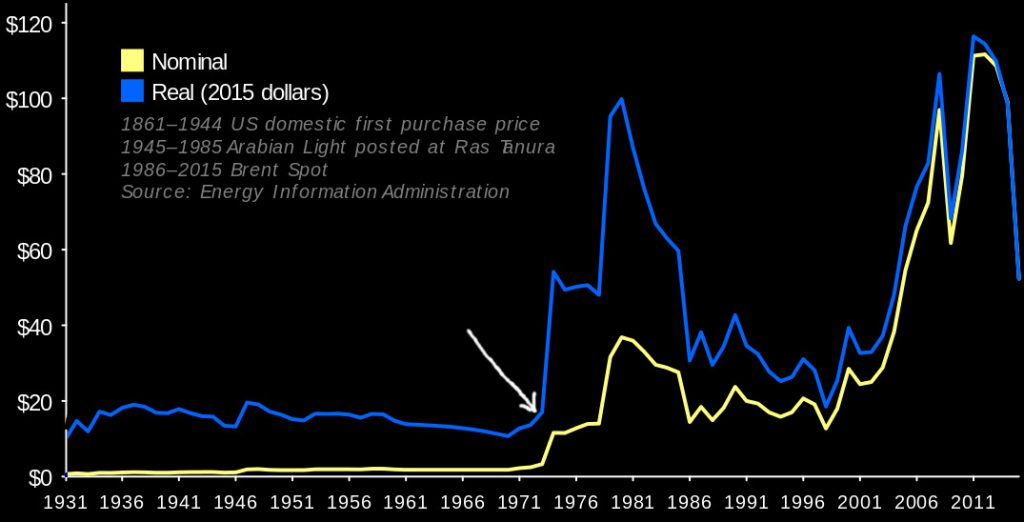 Yes, indeed, when looking at prices in real dollar (the blue curve), there is a very big price surge. We are even given the price in “constant dollars” (the yellow one), and yes there is also a big step there.

We actually have to ask two questions:

The Saudis: Kings of the Oil

First of all, the Saudis were Kings of the Oil at the time. In fact, they were at the same production levels than the US: 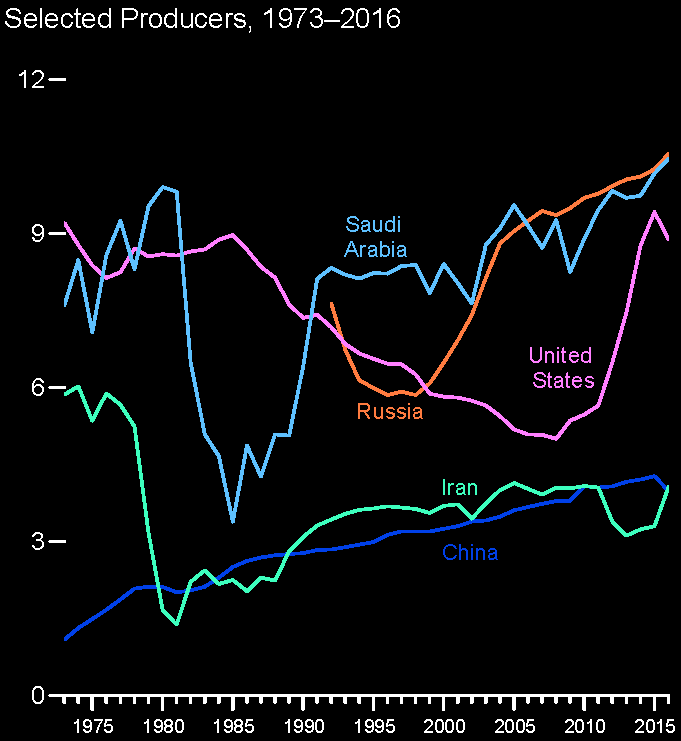 But this is not exactly what matters most. The Saudis were not only one of the top producers. They actually relied on oil exportation to fuel their entire economy.

Let’s check how much they depended on oil: 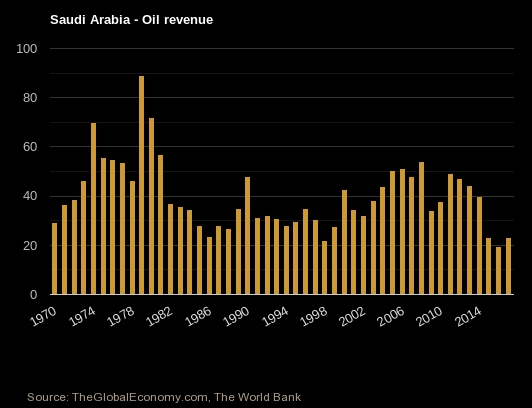 But maybe they just exported more of it? Let’s double-check: 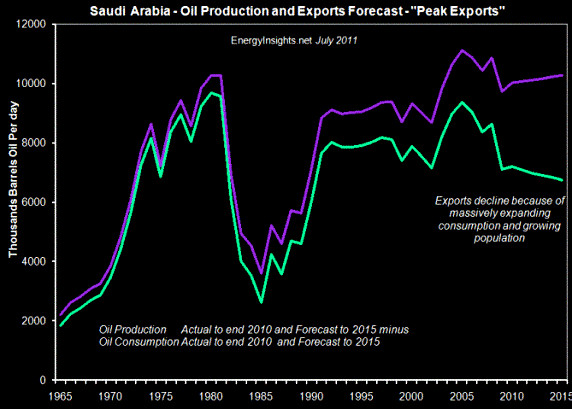 Well, indeed, they exported more of it for sure. They multiplied their exports by 4 between 1965 and 1975. So if it was greed, that greed wasn’t really reflected on the price, but rather on the volume.

As a side note, do you see a huge fall in production in 1973? The small fall dwarfs the rise in price at the same period. Could there be another reason? Let’s dig further.

US and World Production

Now let’s have a look at the world production.

The production didn’t really stop at all in 1973. At most we have a less than 10% decrease in the Middle-East. Surprisingly enough, there is also a decrease at the same period in North America. How could the US produce less oil when they were under an oil embargo??? Let’s have a closer look: 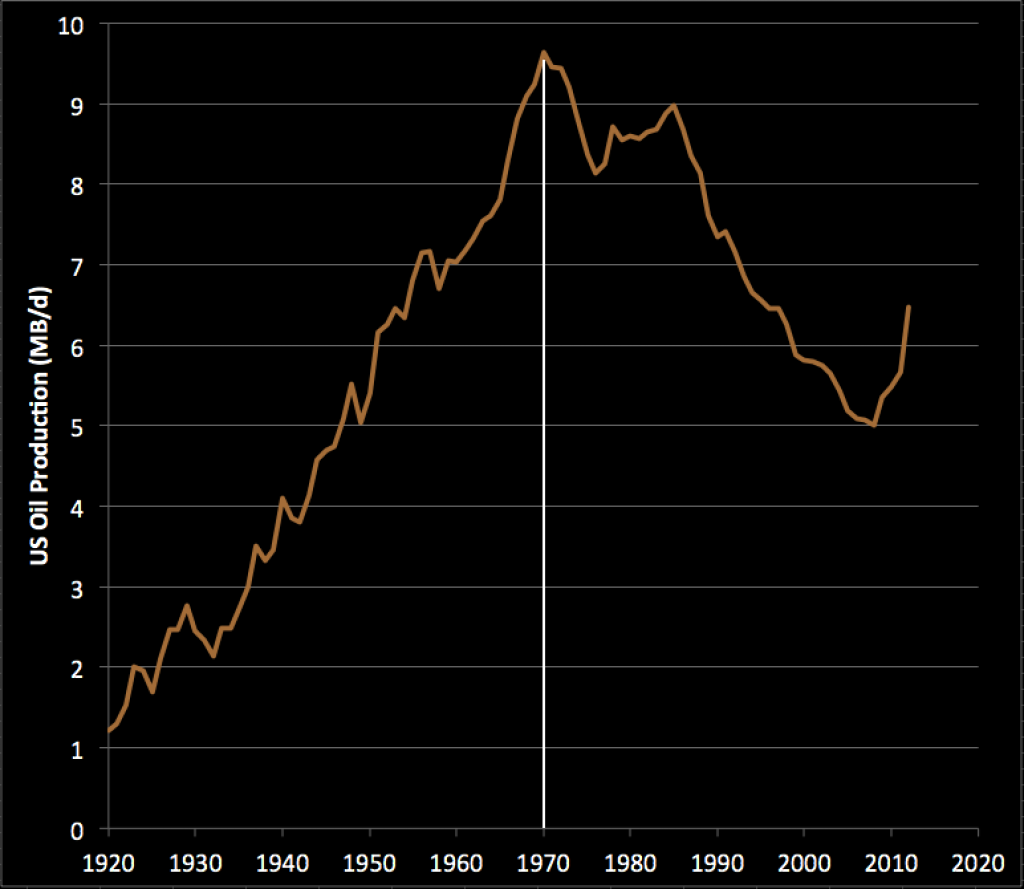 Well yes, that’s exactly what it looks like: US production started slowing down after 1970 and did not go up during the embargo. It only resumed in the late 1970s when most of the crisis had already passed. Isn’t that like shooting your own leg? Maybe we should look at other charts? 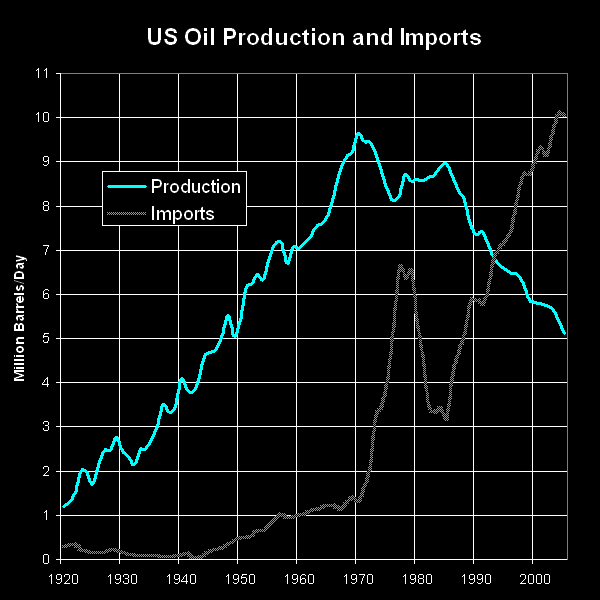 Okay, it’s confirmed. While we see the 1973 very small slowdown in imports, the US reduced its production. The rationale being: “let’s consume all the oil from everywhere else and keep some reserves for ourselves”. Which it eventually succeeded in doing. The Oil Crisis was the price to be paid for it.

The Arab world, like many other places in the world, is a very traditional one. It relies on ancestral stability. It relies on hard values like gold. Even today, the Arabian Peninsula is world famous for its extravagance around gold… among other things.

Besides, gold is traditionally a very important part of showing your riches to society. 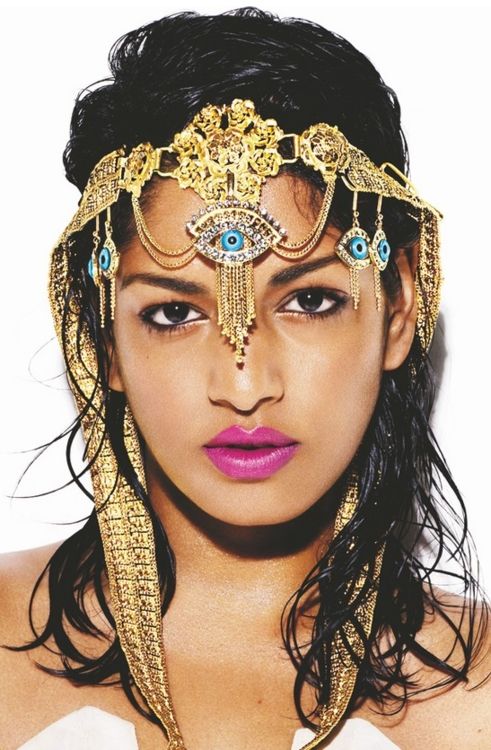 As I explained in my book, the Bretton Woods Agreement in 1945 settled the gold standard and the USD as an international currency. However, because the US printed too many dollars, President Nixon had to give up the gold standard in 1971.

As a result, the USD plummeted compared to gold: 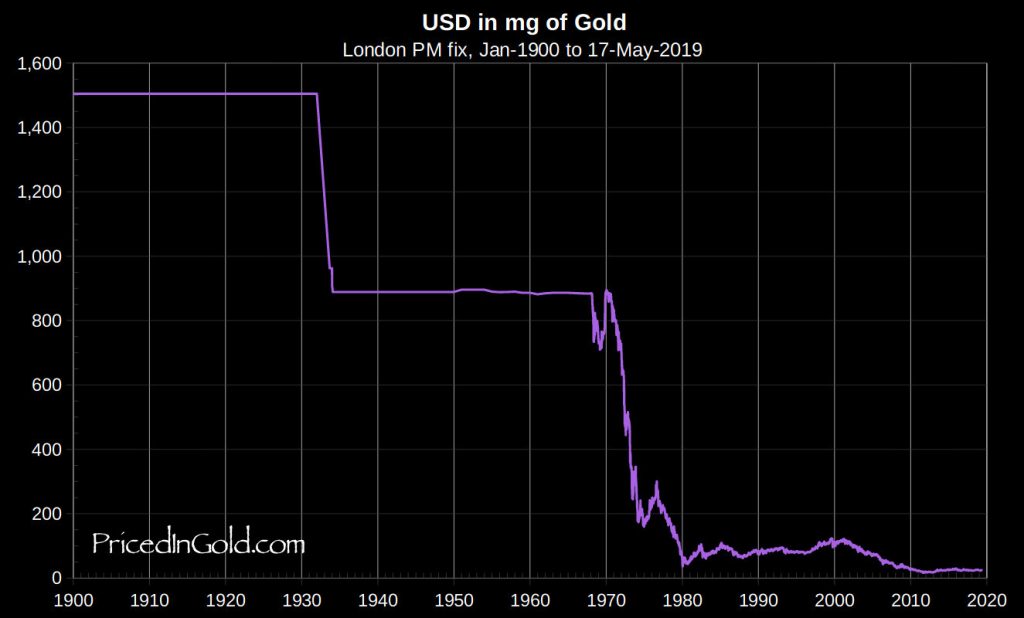 On the other hand, all international trade was still done in USD. So buying oil was still done worldwide in USD. Until recently, it was still the case. Everyone who has tried to come out from the petrodollar went down. Saddam Hussein. Qaddafi. Only the Russians and the Chinese have been challenging this in the last years, and they are setting the pace.

Now let’s go back to 1973. Place yourself in the shoes of a Saudi. You value gold very dearly. In the meantime you are paid with worthless banknotes you could use as toilet paper. You really don’t care about dollars, you care about real value – gold. And what you see is that your Golden Oil has been quite stable for the last decade, but in the last years, it plummets if compared to gold: 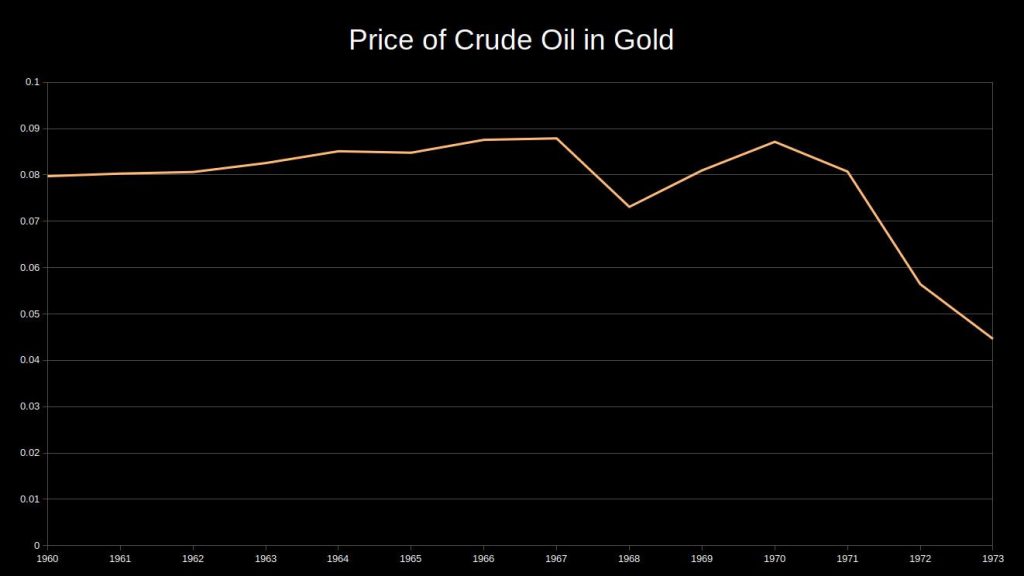 What can you do? You know that your last embargo did take the price back up in 1968, it is quite visible in the chart above. And anyway, this fall in price is too much to take. You must find an excuse to raise the price back to where it was, around 0.08.

The Yom Kippur War was the perfect excuse.

Let’s go on with the analysis and see how Oil behaved compared to Gold, maybe we’ll find some stability there. In that period, don’t forget that the world is going through massive currency devaluations, crises and such. 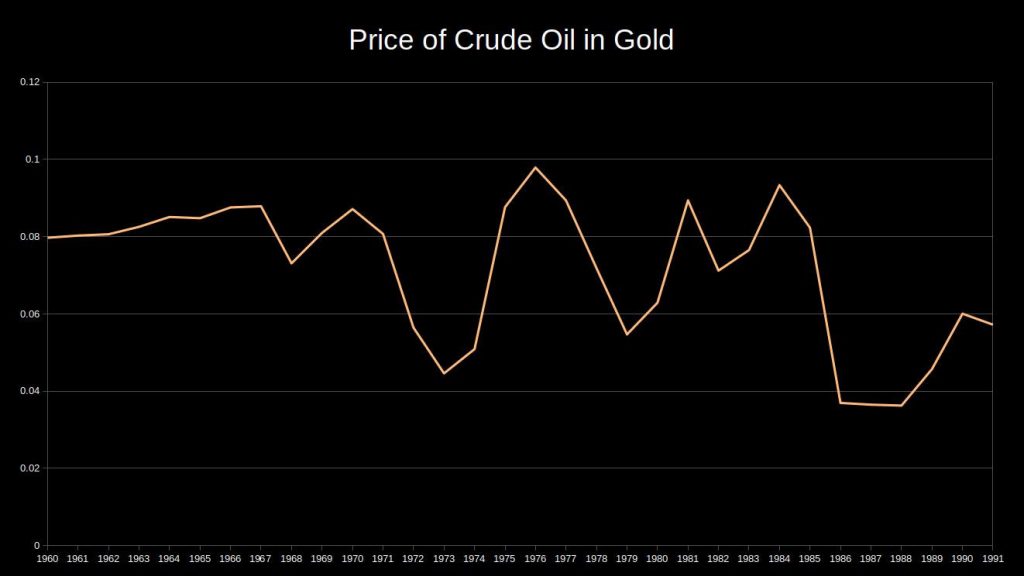 Well there IS some kind of stability there. Until 1985, even if there are waves, the global trend is quite stable. As if something was trying to pull oil back to a given price in gold, around 0.08, whatever else happened.

Let’s analyze this new chart with the historical events in mind. Suddenly, everything makes sense. 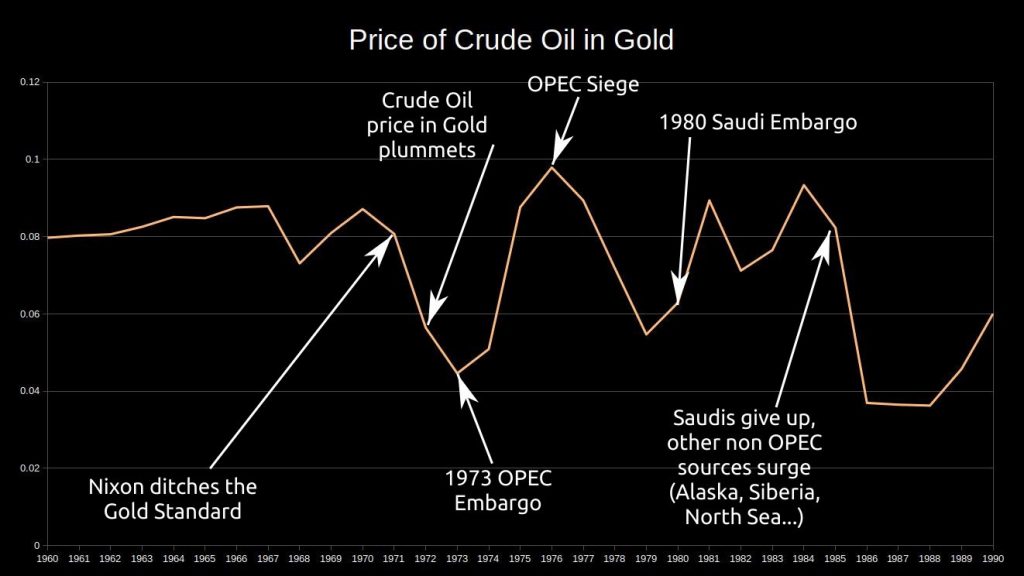 It is quite clear here that the Saudis and others actually protested the falling price of oil. They simply didn’t want to get cheated by the fall of the US dollar. With the embargo, they forced the price relative to gold back up. In fact, they even raised the price to levels higher than before the crisis. Apparently, someone else was following that chart too at the time and the physical attack against OPEC leaders was launched as the price of oil forced its way toward 0.1 in gold.

Five years later, the oil price had plummeted again when compared to gold. The Saudis launched a long term embargo by cutting their exports drastically. They were forced to finally give up around 1985: new competitors came in the oil sector and they were losing some ground. They switched back to volume to earn some money. Bye bye, Oil-Gold standard!

If you still believe that there is no connection between oil and gold in that period, give me a shout! Since then, other events have occurred and may blur this vision. But at that time, I strongly believe this last chart explains everything.

The Yom Kippur War was just an excuse, and Westerners knew very well what they were doing with oil prices, trying to grab some cheap oil as the dollar was going down. Of course, the media told a totally different story to the public.